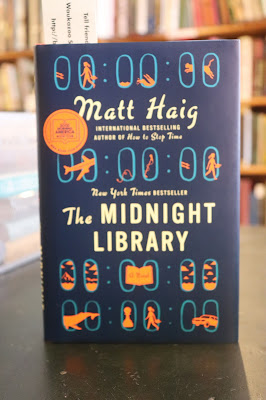 In the early pages of The Midnight Library, a bestselling novel by Matt Haig, I screech to a frustrated halt on page 8. The character Neil “joined his hands together and made a steeple of his index fingers, which he placed under his chin, as if he was Confucius….” But he is clearly not the long-dead Chinese philosopher, so the subjunctive is called for in the sentence, which should read “as if he were Confucius,” and I’m mildly annoyed.

A couple more flubbed opportunities to use the subjunctive correctly come along – and then, suddenly, on page 16, the author snaps into his grammar garb: “As Nora escaped the shop, she wished there were nothing but doors ahead of her…,” and I want to cheer! Too soon! We return to ragged error at the very next grammatical crossroads.

Then on page 25, a new demon rears its head. As Nora enters and begins to explore the magical Midnight Library, she is staggered by her surroundings.

She turned down one of the aisles and stopped to gaze in bafflement at the seemingly endless amount of books.

And once more my inner copyeditor screams out in pain. No, no, no! It is the number of books that astounds our Nora! Books can be counted, as can people. (A “large number of people” assembled for the event, not a “large amount of people.”) Sugar is measured in amounts (teaspoons, cups, pounds, etc.), as is sand and gravel -- also liquids, such as water or milk – and I have to say here that even the Word grammar-checker (not always my best friend) caught this blunder, double-underlining the word ‘amount’ in that sentence quoted.

And this is Viking, a Penguin Random House imprint, Viking, founded in 1925, that calls itself “a legendary imprint” on its own web page. I will continue reading the story but hope not to be amazed by the copyeditors’ oversights on page after page.

Of course, if I were seriously editing my own copy here for publication between hard covers, I'd eliminate this blizzard of italics. And that quote set in the middle of the page that's only two lines long, rather than three lines, is a boo-boo, too. A blog, however, is much more casual, more apt to let the author's voice go unedited.

Postscript: I finished the book and enjoyed it despite its flaws -- and despite having seen well in advance how it was going to end.